Munich is a lovely city, especially its restored center. Allied bombing during WWII took a terrific toll but in 2014 there is little evidence of any remaining destruction. All seems to be rebuilt. There are many parks in which to stroll, and the government buildings are magnificent. From Pope Benedict's church as Cardinal to both old and new city halls, and especially the high end shopping, Munich is a vibrant modern city along the northern edge of Bavaria's Tyrol.

As for Octoberfest, it reminded me of a major summer fair in the United States. We visited on Unification Day, a national holiday in Germany. It was fun to drink beer with the locals, appreciate their traditional costumes, and walk up and down the entertainment strip. Like I commented earlier -- Octoberfest is a celebration, a time to kick back and enjoy life without the burdens of work and daily drudgery. Enjoy! I did.
Read More 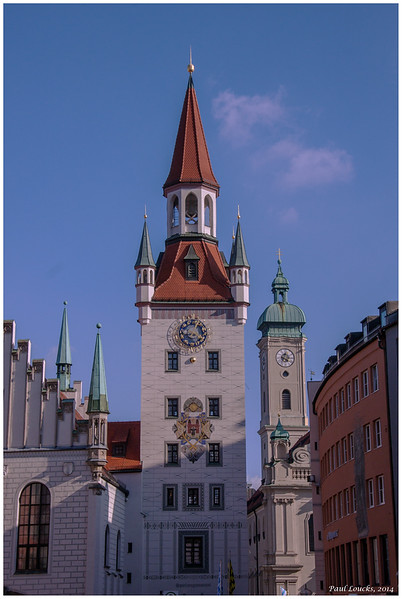 Another View of Altes Rathaus

As a young adult Adolf Hitler painted the Old Town Hall. In the past week, the painting sold at auction for a very high price. Icons are icons -- go figure.